It’s strange how life surprises you sometimes.  I would never have guessed, for example that I would have found myself blogging about Economic History, and how exciting it can be.  I am a fully-paid up narrative and feelings girl myself, so columns of figures having a real tale to tell came as a massive surprise to me.  But, let me backtrack and set the scene for you.

A couple of months ago I was approached to be on the editorial board of a new academic journal called Organizational Aesthetics.  This is absolutely my thing.  You could not get a journal closer to my interests really, as no-one is going to start one on critical management studies and stitch, so when the particularly lovely Steve Taylor asked me to be on the board I couldn’t refuse.  He is such a great bloke no-one could refuse, but this was something I actually wanted to do.  So I said yes.  Which was fine.  But then he sent an email round saying, perfectly sensibly that he wanted a really good first edition of the journal so could all the board members submit something by the end of the calendar year.  Oh.

Now, academic journal articles are not like non-academic articles.  The idea is you have an idea you want to tell the world about but before you can do that you have to go and make sure you have read absolutely everything ever written in ‘the field’ which could go back to Plato, and having done this, you precis it, and then get down to the business end.  This is where you calmly announce to the world that all these people (with the exception of any who are good friends) are idiots who missed such obvious and essential points that it’s surprising they can hold a job down in a reputable university.  The whole body of literature is riddled with the ramblings of idiots and – and this is the killer – thank the Lord you are here to sort the whole sorry mess out.  You do this secure in the knowledge that next year someone will come along and lump you in with the idiots, but as all knowledge is temporary and contingent, you will take it on the chin.

I exaggerate, of course, but academics reading this will recognise the germ of truth in it.  But exaggeration aside, you can see how this would be a long and drawn-out business and unlikely to come to a happy conclusion this side of Christmas. So, either I had a look in my professional attic to see if there was anything that would ‘do’, which didn’t seem fair to Steve or the journal, or I had to create something new from scratch.

So, I have been thinking about this.  And I decided to do something new but do-able.  So I turned to a bit of the Laura Ashley project which I have been meaning to get round to, based on a paper I went to at the University of Bristol earlier this year.  The paper was by Cindi Katz on ‘Cartographies and Cartouches: The Geographical Imagination of Accumulation and Dispossession’.  The speaker referred to the work of Elizabeth Maddock Dillon on maps and cartouches.  This was the bit that really got me interested.  Dillon was drawing our attention to the tension between the map and its cartouche.

The cartouche is the bit on the map which tells you something about it, and Dillon suggests that this can be a counternarrative to the map itself.  The map itself aims to be an objective representation of space and place, whereas the cartouche tells you something about the map and often contains an illustration – thus dealing in a second, and often metaphorical language.  Here’s an example taken at random:

The cartouche sometimes tells a story – often the grand narrative of colonisation.  So you might find an illustration like this:

which exotises the New World, and tells a tale of the Old World bringing civilisation to it.  I like this idea of two stories going on simultaneously on the same plane.

I thought it would be really interesting to produce some maps of the interview data from my Laura Ashley project and use them as cartouches about the wider story.  So in this first example, some people have talked about cotton itself and clearly this has a long history.  So I wanted to play on the tension between these two elements or narratives.  The ‘map’ deals with some of the pretty unpalatable ‘facts’ (all my academic training militates against my calling anything a fact, I can’t help it) about cotton, while the cartouche deals with the feelings of the quilters – and myself about it.  Here’s a picture of the map in progress:

Here’s the cartouche in progress:

The cartouche still needs me to add some Laura Ashley fabric, and to think up some sort of border, but I think it works well as a very different sort of story.  The quality of the writing is different.

But to return to where I started, I was really fascinated by some of the numbers in the map, and how they also tell a story.  So, I pieced together things from websites (and I couldn’t have done this piece of work without the web) and traced the development of the technology which made cotton into a viable commodity (it is hard to grow and then treat).  I amazed myself by making the economic data into a table which showed the influence of this technology in created an industry which then required labour and thus gave rise to the slave system on the plantations.  As the land was depleted by the cotton plants the planters moved further into what we think of as the South and displaced the Native Americans.  And there was the parallel story of Britain’s industrial revolution which grew as the US cotton industry and slave system expanded.  I watched the numbers filling up the columns telling their own story: 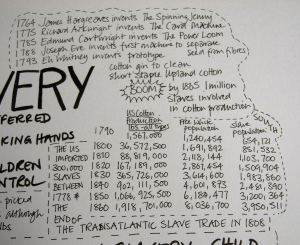 I got really quite excited about this.  I could imagine what it must be like to be an Economic historian and to see the numbers start to unfold in front of your eyes and tell you what happened.  It felt a bit like watching a photo develop in the days before digital photography.  And this is an experience I never thought I would have.  It is a very different sort of making.  Working with pen and ink like this is stressful: there is very little room for error, although some of the contemporary artist/mapmakers I looked at (and will blog about at some point) don’t seem that bothered about mistakes and leave them in as part of the texture of the piece.

So, I will finish this piece.  I was hoping to do five pieces but think this might have been ambitious.  So, I might do three more if I get time.  I am enjoying working on paper, for once, as well.  And I’m really glad that I got to do something with this part of the project.  It has also allowed me to engage in what I describe as aesthetic activism.  This project allows the viewer to make up their own minds about the cotton industry and its cloudy relationship with quilting, but the piece does have a political intent.