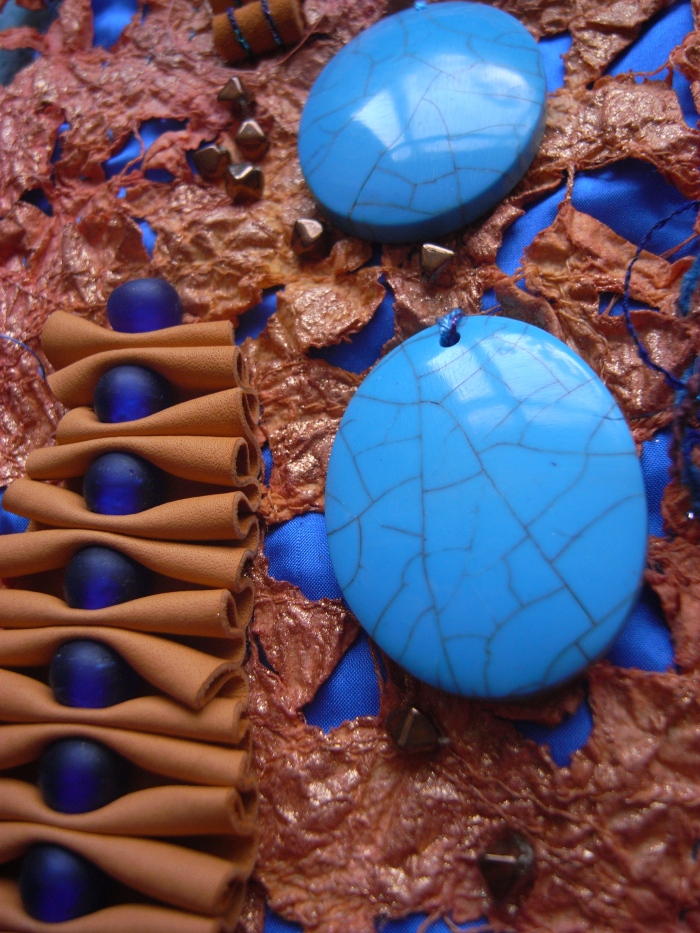 The photographs today might take a bit longer to load as they are much higher than resolution because I wanted them to show some of the detail that the phone photos tend to blur.

Soo, I’m not really very inspired by nature.  I am inspired by artists who are inspired by nature, but really I get my spark from manmade things.  (I have just spent several minutes trying to avoid the loaded manmade, but person-made is too ugly for words).  I like finding inspiration in the baroque, renaissance and gothic.  I find it in jewellery, textiles, decorative arts, the Financial Times, all over the place, but never on a seashore and never in a wood.  Both those sorts of places offer balsam for the soul, but they don’t feed directly into my work.  I have never worked with peeling bark or rusty metal.  I like ornamentation, decoration, encrustation.  So being confronted by the natural is a bit alien to me. I very often even work in synthetics, although silk and cotton do figure heavily in my work.  The point of this preamble is to say that once again, confronted by the beauties of nature, I produced something an anthropologist rather than a botanist or a zoologist would fall upon.

First up I made this, which looks better in this arty photo than it does in real life: 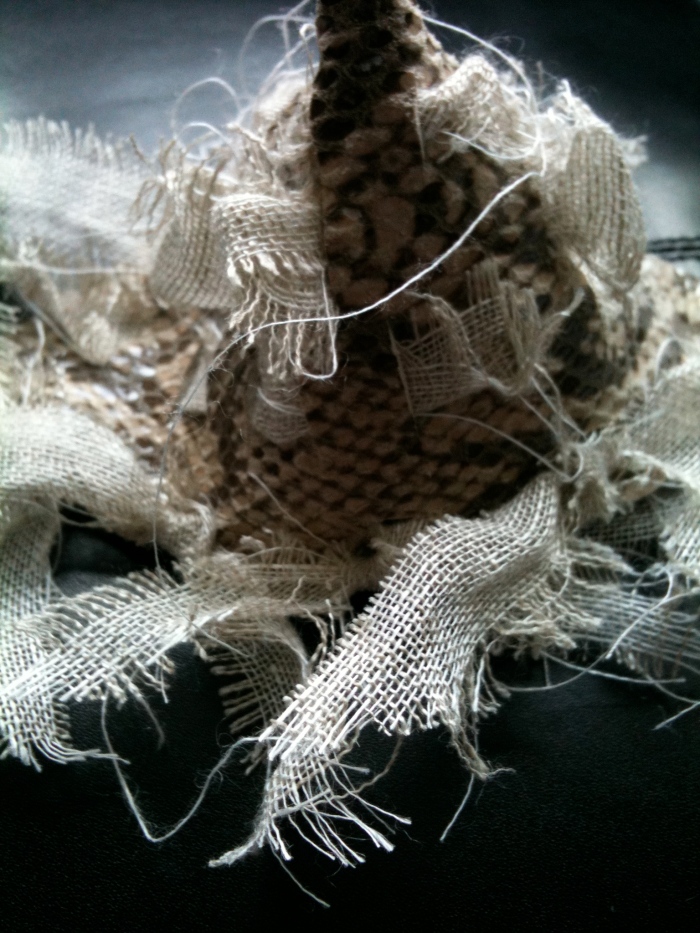 I was using a lower-grade plastic coated snakeskin printed leather provided for us to try out before moving onto the exquisite stuff Basil, our tutor provided.  I decided to pleat and fold it, and quite liked the ceramic look it produced: 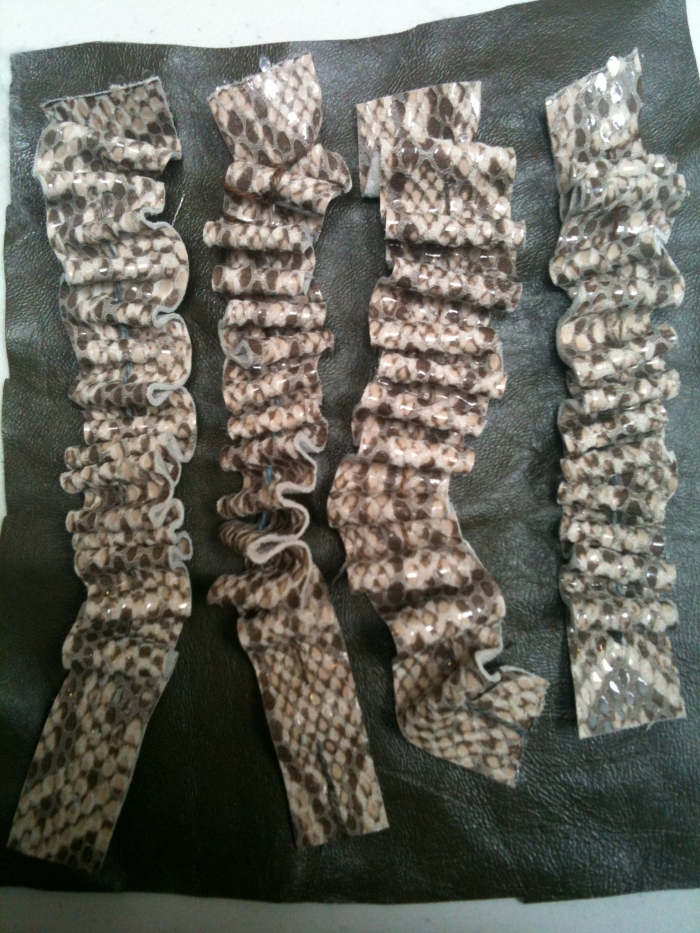 I liked this and decided to include other materials in the folds: 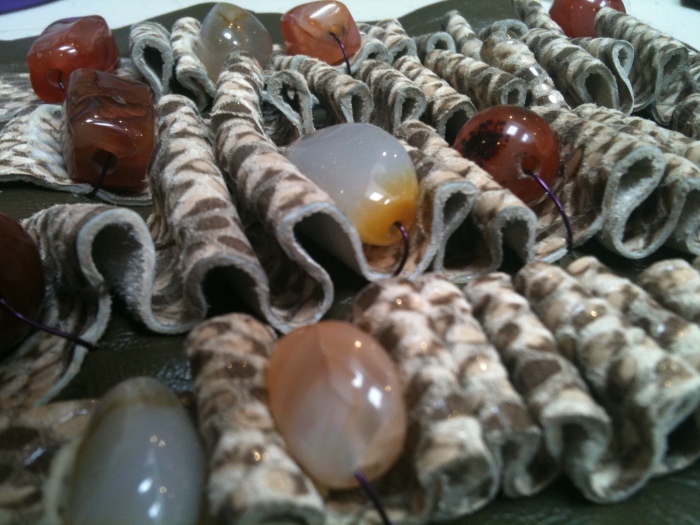 (Very many thanks, by the way to Janice T who gave me a big bag of beads which I used in this and who hasn’t been properly thanked yet.)  The beads were from an old necklace and the holes were drilled on a curve meaning I couldn’t get a needle through, so they are wired on with wire from lovely Debbie B. who was sitting next to me.  Basil is committed to working with every bit of everything and never throwing anything away, so this community effort to bring the piece to fruition seemed in keeping with the masterclass.

Having got this far, I was away.  I knew I wanted to spend the weekend folding and stuffing leather! 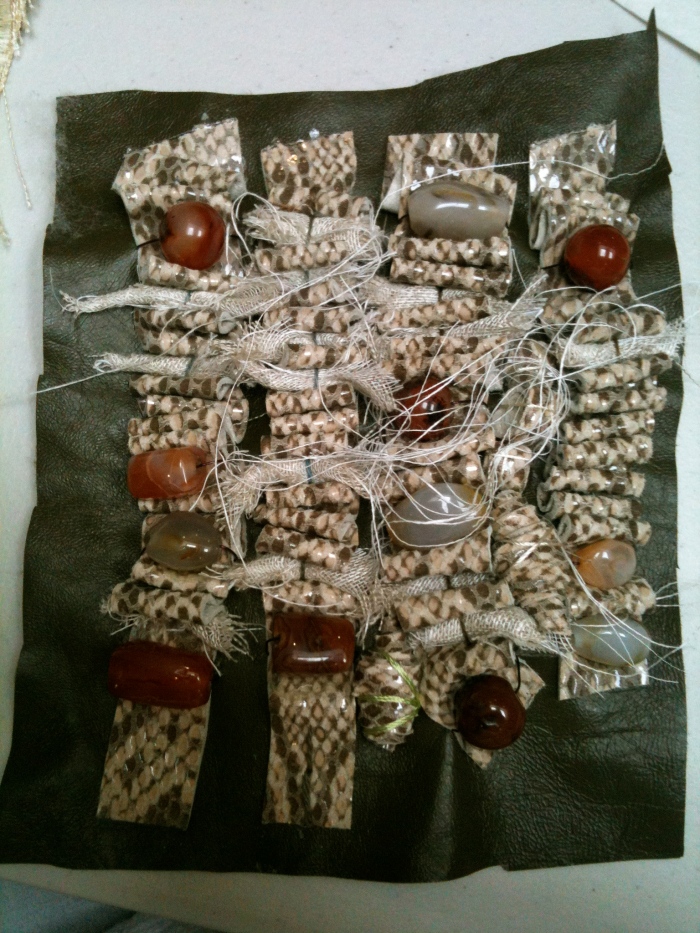 While I was waiting for the medieval historian to collect me, I was flipping through some of the gorgeous books Janet Haig at Heart Space had brought in for us, and saw this in a book on weddings: 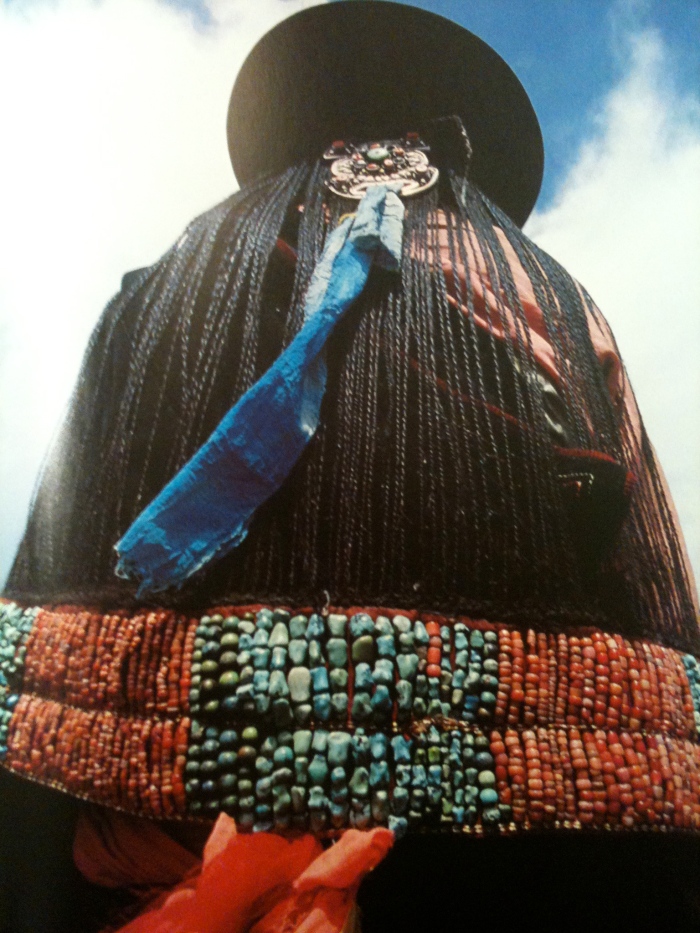 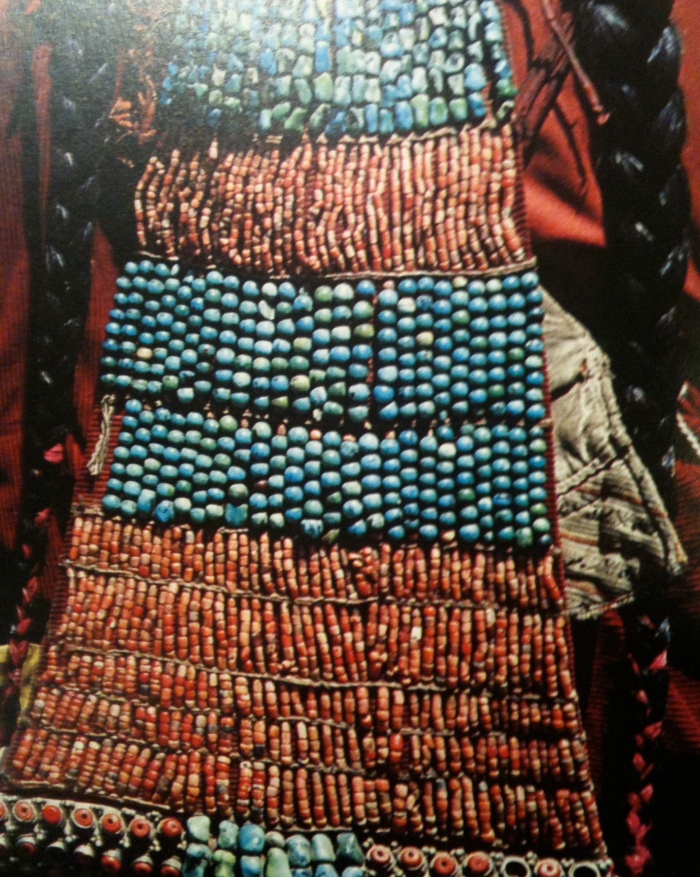 Again, the inspiration comes from things that people have made.  I loved the stacking up of row after row of beads.

So, I went home.  I went to bed.  I couldn’t sleep because my mind was churning and so I got up and made all the ideas I had for leather in furnishing fabric.  So this is the maquette: 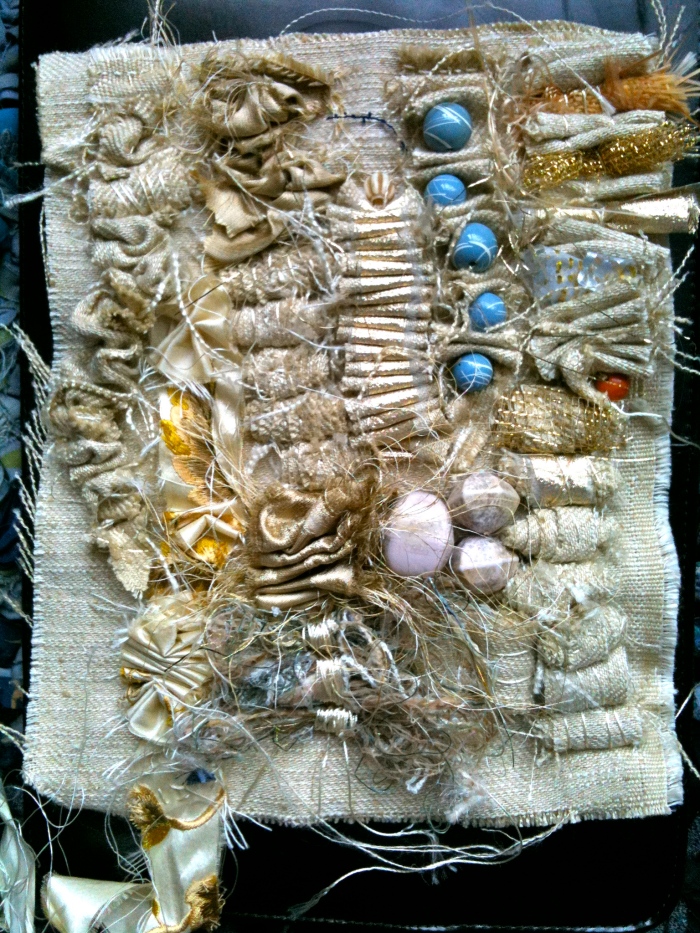 And here’s a detail of the wrapping and stuffing: 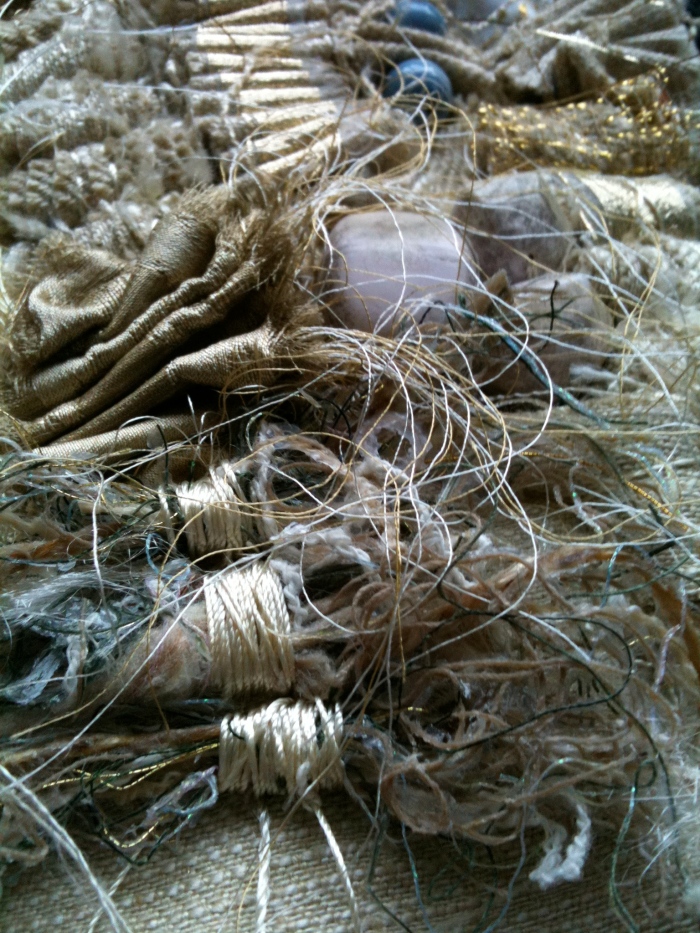 I had seen some beautiful orange-y yellow leather I wanted to work with and to contrast that with blue.  I found a piece of backing which I had done some work on, but not really finished made from upcycled plain white tissue, machine-stitched into a grid and then soaked away in parts.  This was then painted, gilded with the cheapest gold poster paint for kids from Tesco and mounted on deep blue habotai silk with wadding: 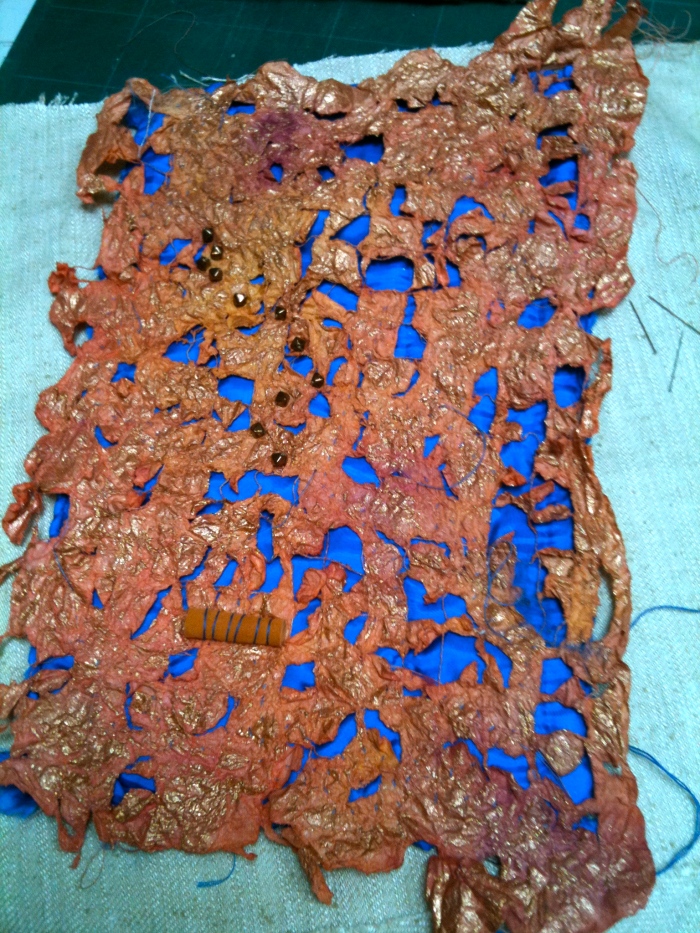 Basil had a pricking wheel which allowed me to make vey accurate pleats in the leather by stitching into the regularly spaced holes, and this lead to amazingly controlled work for me: 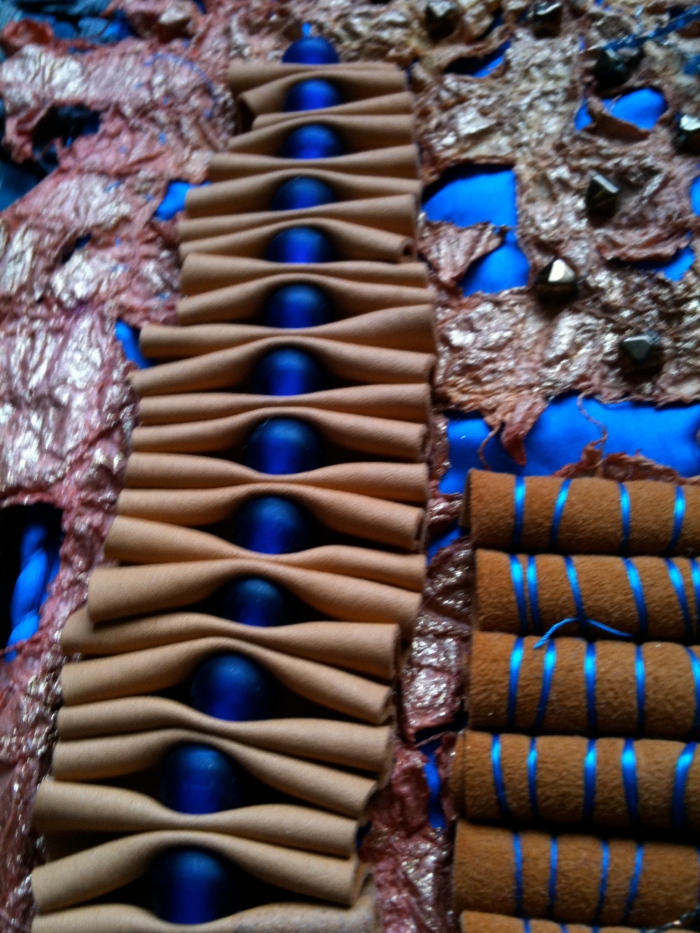 I thought I had finished the piece: 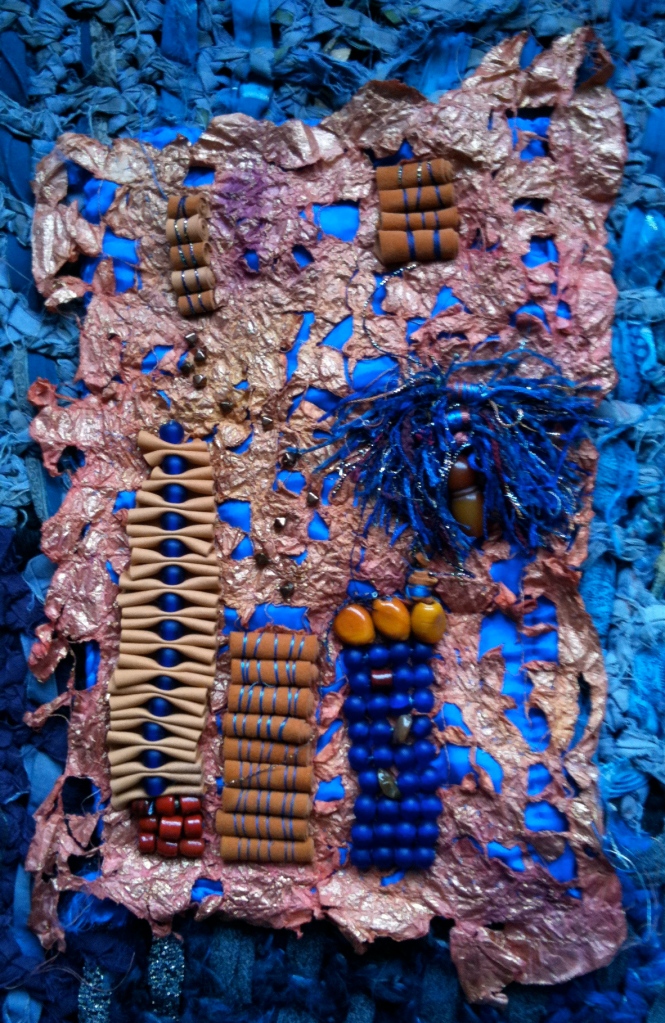 I decided it needed more blue and that I would have to put something over an existing area of beading: 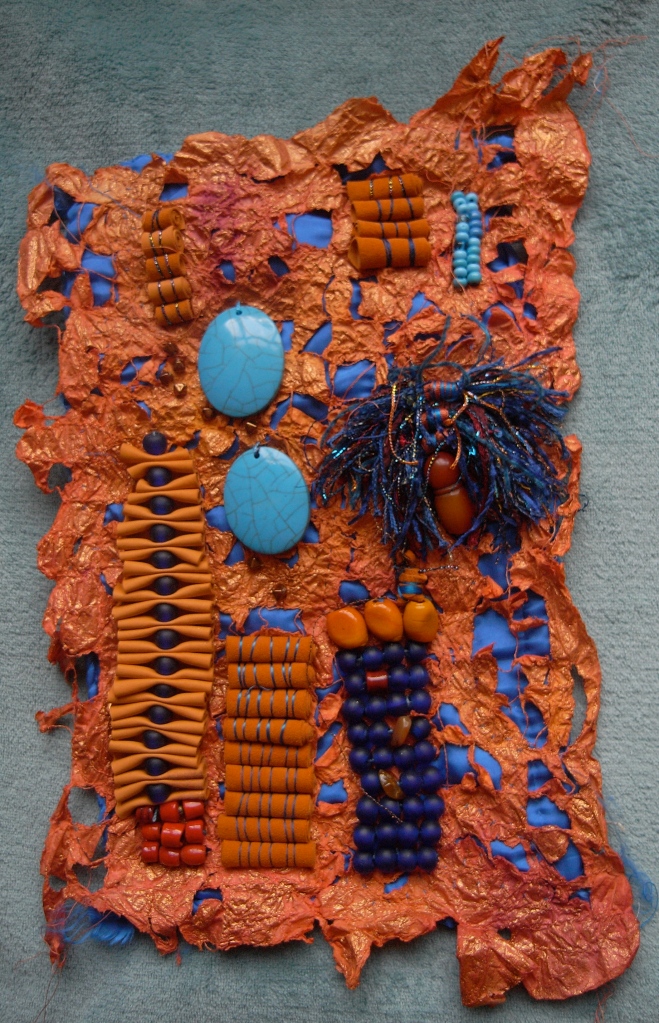 One of the things that I had really enjoyed doing on this piece was making beads.  Normally I hate this stuff, but the leather was very accommodating and the process was fun.  I also refers back to the headresses I had liked: 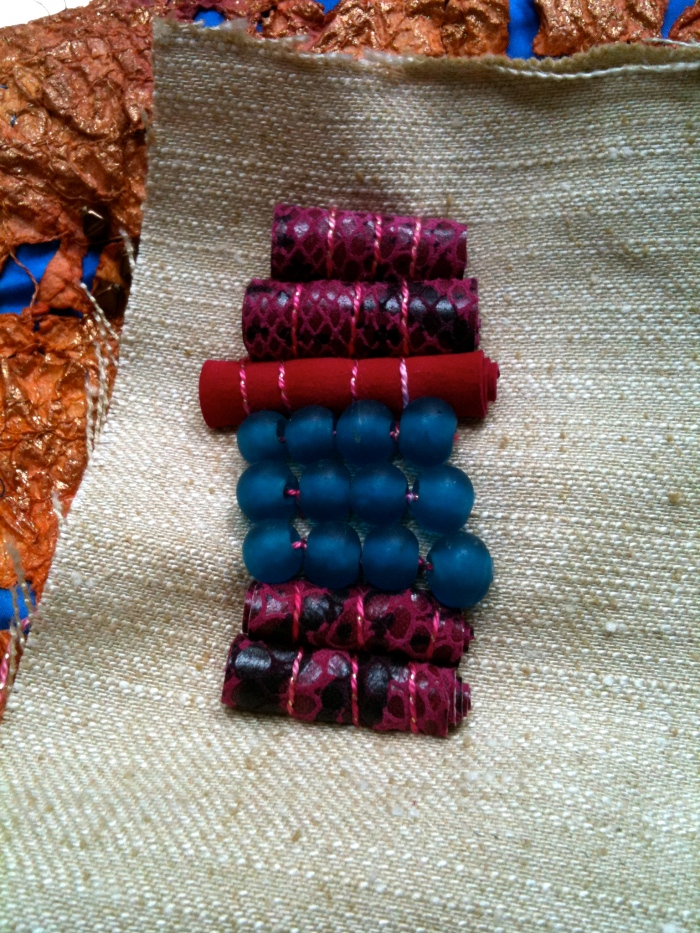 As we got to the end of the workshop I was getting  a bit tired and a bit at a loose end, and so I picked up this trial piece again.  Coincidentally, two weeks ago I had recourse to Saint Anthony, the patron saint of lost things, to help me find something at work.  I do not know why I ask him to intercede and I only do that about once every ten years (very sentimentally important earring, my dog and then some important papers).  Because I don’t trouble him very often – not being a believer it seems a bit impertinent to pester, he always comes through.  I promised this time that I would make him something in thanks, so here is my thank you offering, my ex voto, to Saint Anthony made almost entirely of leather beads including at least one made of perch skin: 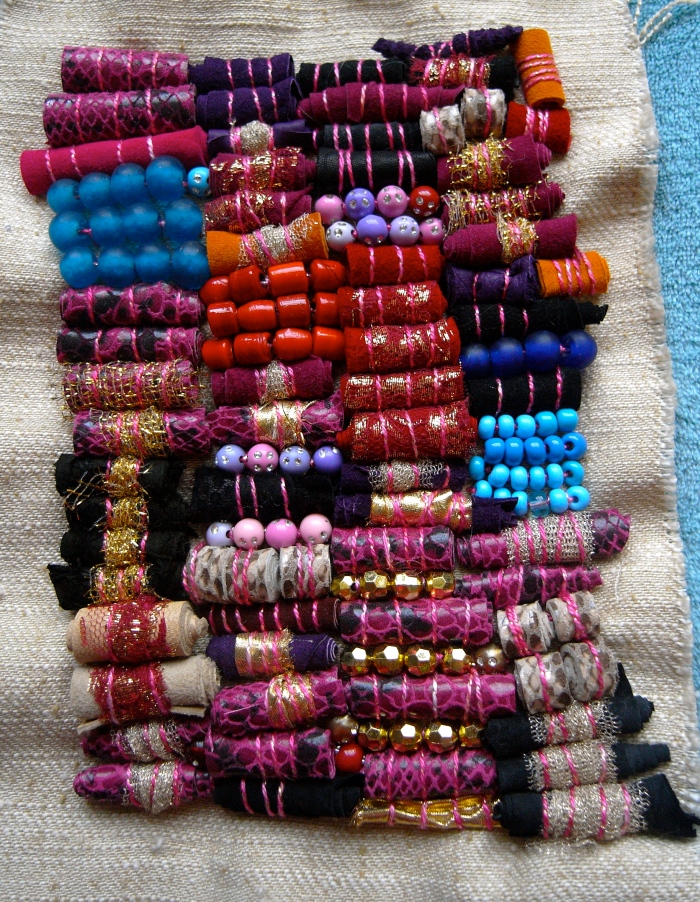 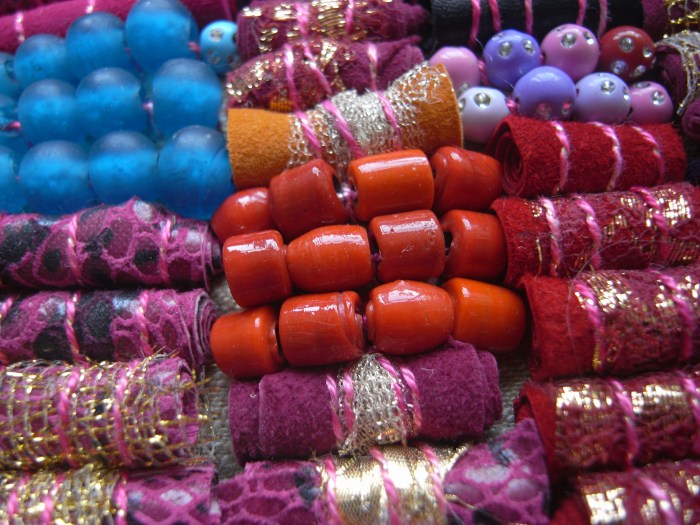 I will do a much more academic piece on this and the political significance of excessive work in another post, but I will finish with thanking St Anthony one last time.

5 thoughts on “What I made at the weekend”