I  apologise for the large gap that there has been between posts.  The first reason for this is that I have been travelling a lot for the day job, but the second reason, which is more interesting, is that my latest project involved quite a lot of stages which have taken a while to complete. This is my latest doll, an offshoot of the Laura Ashley project but not actually, directly part of that work.  This doll is part of a piece I am working on about the maleness of academic writing.  I am reasonably successful at publishing, but I often feel that I have to take on masculine characteristics to do it.  So the work is supposed to be objective, neutral, detached, linear, sequential, smooth and assertive.  There is no room to be modest, tentative, open to dialogue.  One of the great theorists of gender and very trendy still, is Judith Butler, who suggests that women wear drag all the time.  We cannot live up to the stereotyped image of what we are supposed to look like (see for example all those goddesses at the recent Oscars) and so we spend our lives in drag, approximating but never quite getting the feminine persona quite right.  So, I decided to make a drag doll, because women in a man’s world know all about trying to pass as a pseudo man but never quite achieving it.  This is for a paper I am writing on feminine writing.

That’s the background to the doll.  I decided that I wanted to make her a typical male suit.  Originally I thought I would make it out of dark plain cloth, but then I thought it might be nice to have a fabric which was a bit distressed and distorted, a bit stretched at the seams, to show the effort involved as passing as a man.  And then I thought it would be nice to have some feminine fabrics blotted out with a layer of something dark, like the need to put an attempted masculinity over the top of one’s femininity.  In the end I took a sample pack of fabric that I bought on one of my trips to Copenhagen and used that.  The sample pack wasn’t that exciting, but it was truly random, and it was interesting just because it was Danish.  I am quite shallow.  I stitched the cloth onto a thin cotton wadding with hand and machine stitching.  I thought it would be a more solid ground for what was basically appliqué, but it did, of course, yield quite a bulky cloth.  So this first stage of making a large piece of cloth to cut into took quite a long time given the amount of hand stitching I did: 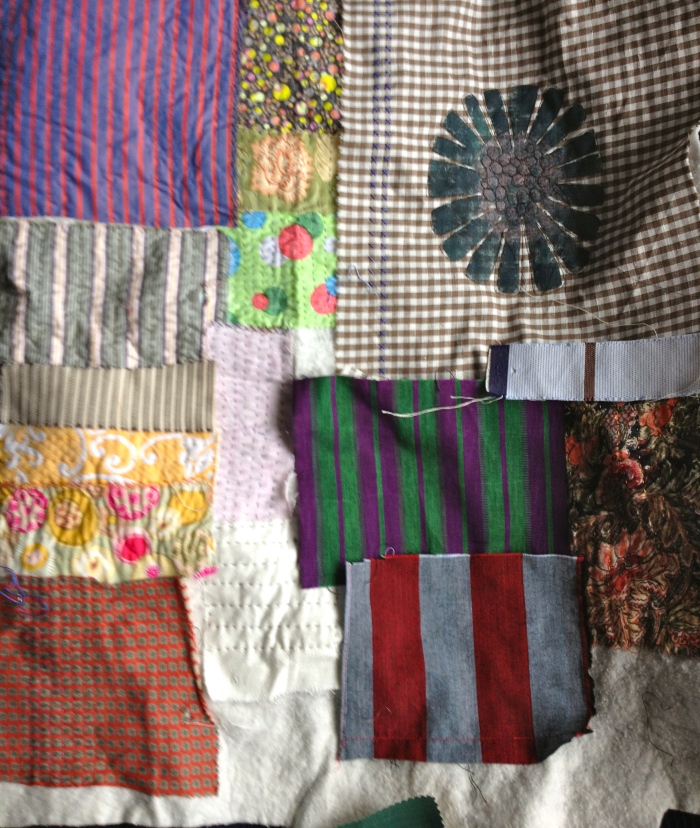 The flower at the top was stencilled on using acrylic paint.  I don’t think that I even used a fabric medium.  Then I machine embroidered on top of it: 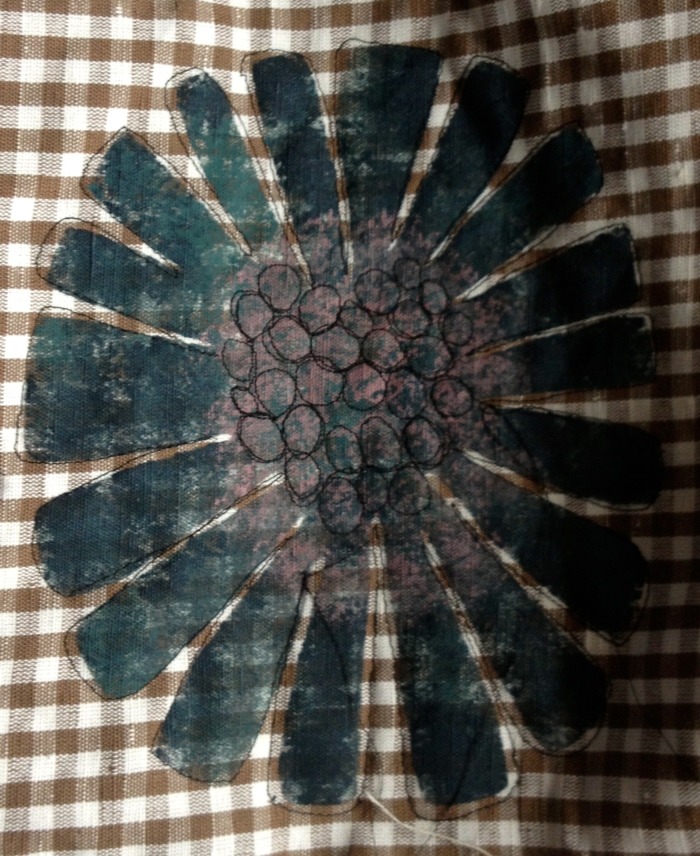 When all the stitching was done, I used a sponge/foam roller to paint black gesso over the top: 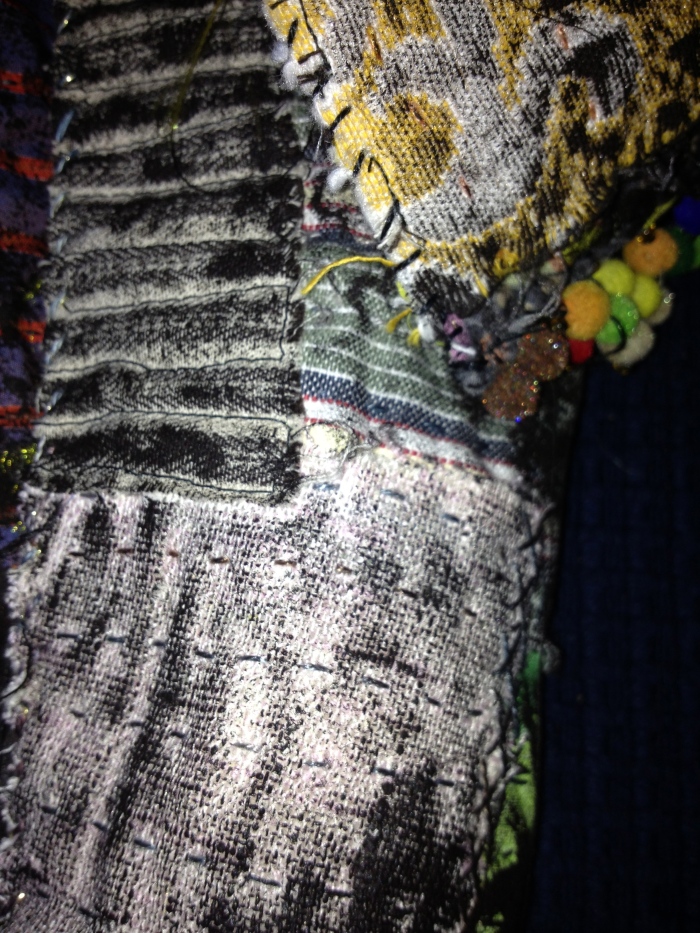 I didn’t plaster it on, but I put enough on to show the quilting and the various textures in the cloth.  Then I used this piece to cut out the clothing for the doll.  I decided that I would make a toile as this was going to be at least partly fitted.  I started with the trousers which I fitted using pleats at the waist.  This a shot of the trouser legs which shows the quality of the cloth:

One thing that I have noticed as this project has gone on is that I really have enjoyed fitting the clothes which have become more complex as the work has progressed.  By the time I had made the trousers, which were pretty baggy and reminded me of either the Yves Saint Laurent pierrot cut or David Bowie in his Japanese phase, I realised that I seemed to have stumbled in fashion rather than some sort of statement art doll.  I thought the fabric looked fantastic and would have loved a similar pair of trousers myself.

After the trousers came the jacket.  I am very pleased with the way it fits, apart from needing some back shoulder darts – as these dolls do have funny shoulders to fit behind.  I got a nice fitted line and the sleeves were okay and I remembered how to do collars and lapels from years ago when I used to dress up Ken and Paul, the boyfriends of Barbie and Sindy respectively. 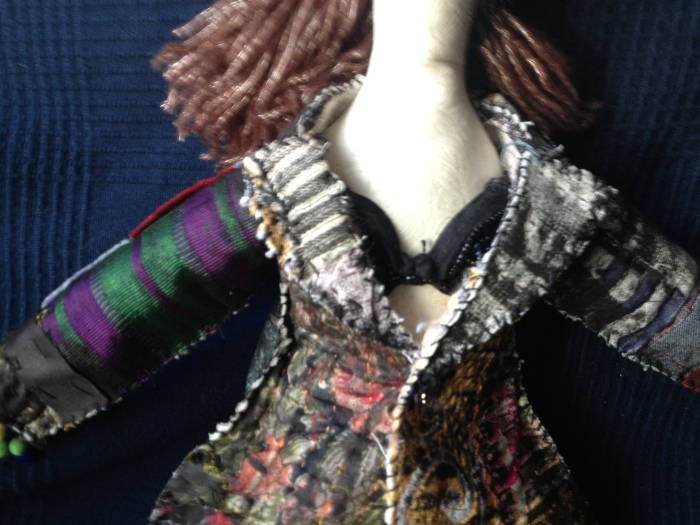 The back of the jacket has a large black sequinned motif:

The seams are deliberately exposed to draw attention to the manufactured or contrived or constructed nature of this disguise.  I finished the whole thing off with some lovely bobble trim from Aarti J which I bought as a remnant a couple of years ago at the Festival of Quilts.  The scale and slightly muted colours seemed to fit perfectly.  Finally, I put on the false moustache which was made from perle cotton stitched onto the ribbon which had bound the bobble braid into a bundle:

The hair, by the way, is a cheap Sirdar yarn which I found in a bargain bin.  The silvery thread in it suggests greying hair to me.

You may well have noticed that this doll has rather prominent underwear: 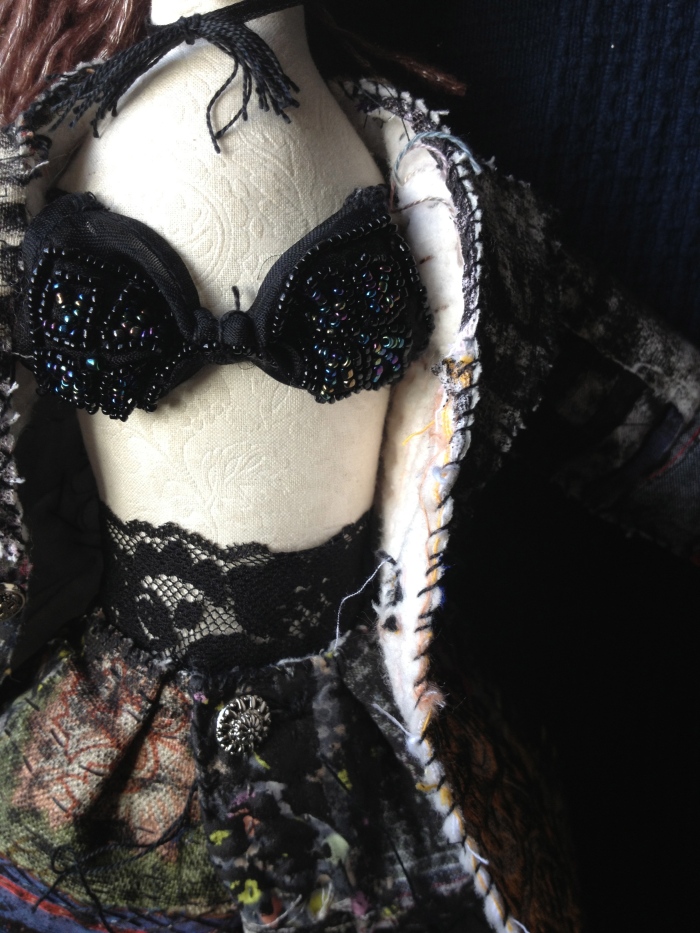 This was originally intended to show how difficult it is to pull off this whole drag business.  It is hard work trying to be a read man, even for men.  So, even though we try to put on men’s suits we end with smart riding coats in gorgeous textures that even the most dandified metrosexual would blanch at, or our underwear shows.

It struck me, though, that this appropriation of male clothing had been reappropriated by the masculine.  The invention of the trouser suit on which this look is based, is credited to Yves Saint Laurent and his version, le Smoking, which was part of his first ready to wear collection in the 1960s.  It was an instant success, but was originally quite gamine and tomboyish and always worn with a frilly white blouse and demure black bow.  Catherine Deneuve wore it particularly well, but this gives a pretty good indication.

The emphasis here is on the line and carefreeness and freedom and a certain childlike innocence, I think.  But very soon women wearing men’s suits became eroticised.  This is a famous shot of another Yves Saint Laurent suit:

This one is androgynous but definitely sexualised.  As I began to look out for images of women in Le Smoking, it became apparent that the look was very much open to titillation.  Bianca Jagger caused a stir when she married Mick in a white version without the blouse, coincidentally made for her by Saint Laurent.  Everywhere there were women wearing the tailored look with their underwear showing.  The current version of GQ that I picked up had one of the stars of Homeland  in a variation on the theme:

I was all set to theorise this as the masculine colonisation of our spaces for drag, or assuming masculinity, when I picked up the Radio Times only to find Sue Perkins, one of the last people you would expect to be posing for cheesecake pictures, using exactly the same visual trope.  Then I saw her again on the cover of Diva, a magazine for lesbians:

This turned out to be at least her second cover using this idiom:

So it is not just the patriarchal hegemony that has colonised this form of drag.  It has clearly been claimed by gay women as well.  I suppose this leaves me with the realisation that the hint of underwear is a universal fantasy image, which reminds me a bit of the notorious slogan for Lovable bras from the 1970s: ‘underneath they’re all loveable’.  Putting on a man’s suit is sexy because it is taboo (it is how Joan of Arc was finally entrapped and condemned).  The underwear both heightens this, and undermines it: it is okay, they aren’t really men, they wear bras which we as men know that we do not do, and possibly, we as lesbians know that men do not do.

S0 when people ask me how arts methods move me on in my thinking, I think that this is an interesting example.  Without making the moustachioed male Laura Ashley dolls I would not have arrived here, and I would not have nearly as interesting angle for my next academic paper.

After all this, there seems nothing left to do but end with Madonna in her tux and underpinnings phase:

7 thoughts on “My latest doll”