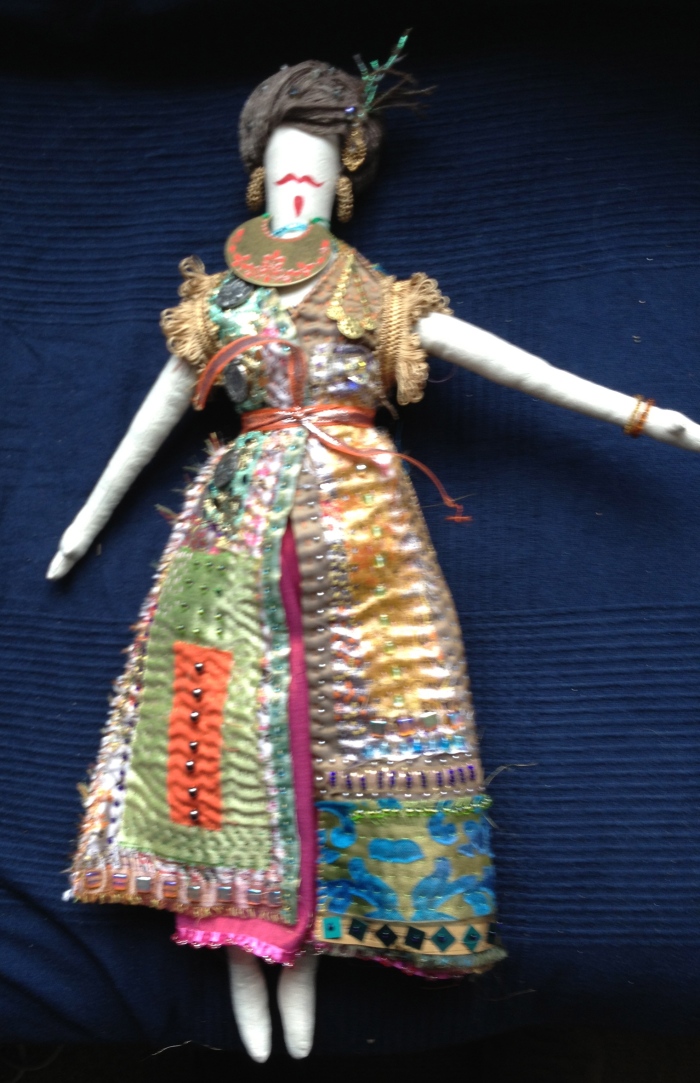 This is the second in my short series of (D)rag Dolls.  I am very proud indeed of those brackets.  They are very trendy at the moment in social studies and now I have my own.  I have used Text(lies) for some time but that isn’t exclusively mine.  Yippee.

That aside, this is the second rag doll I have made for a paper about women in organisations.  I haven’t finished thinking the analysis through, so don’t want to write too much about it here, but in a nutshell, I am playing with ideas about Orientalism.  This is a concept which is much debated and critiqued.  It was originally developed by Edward Said in his foundational book Orientalism (1978).  His contention roughly is that the Orient was positioned against the the Occident by imperialists and colonisers in a way that legitimated occupation, conquest and exploitation.  People from the East were portrayed as exotic and very different from the Christian West, not like us and in need of civilisation.  It is the same argument used in Africa and even in Ireland.  The East was a place, according to the narrative of Orientalism, of decadence, indolence and heathenism, full of odd customs, harems and slavery.  So there was quite an element of eroticism contributing to the Victorian notion of an Orient that needed British men of moral fibre to sort it out and modernise it.  The essential element in all this the idea of Othering – always written with a capital, in which the strange person who is not you becomes almost a thing rather than a human being, and certainly less than you, and in most cases something to be scared of and subdued.

So, this doll is about that.  About women in organisations being Othered from the sober-suited men through their drag performance as idealised feminine women.   The Other is by definition not included in the other group and so is always alien and generally unwanted, even though there can be a rhetoric of desiring diversity in order to stimulate growth and corporate renewal.

I am still working on all this, so it is probably worth just having a look at the doll. 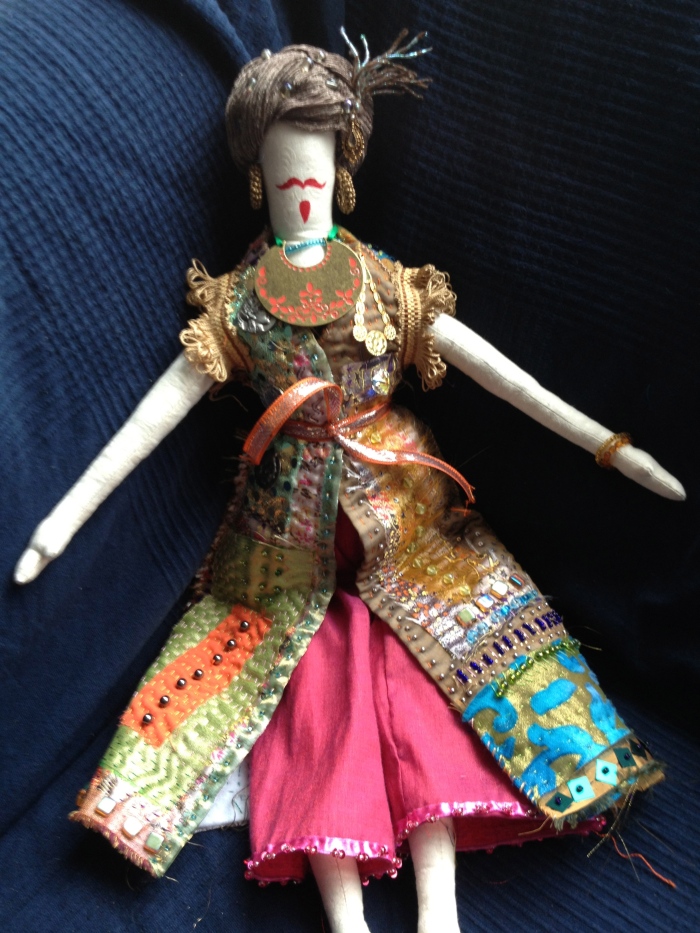 This photo shows her pink trousers, made from quite expensive metallic cotton which came out looking like cheap lining which was a bit of a shame, but something to meditate on.  The jacket over the top was originally made for an IKEA soft toy rabbit, who sat with me during quite a nasty illness, so I decided to make him a sort of king of the rabbits coat.  That phase, thankfully, passed, and I never finished the coat.  So I got it out to make a very Orientalist coat for the doll.  While I was doing it, I think I channelled a lot of the images in a brilliant exhibition I saw at the Tate a few years ago called The Lure of the East.

This loose tunic or jacket with harem pants was a recurring theme.  This is one of my favourite pictures ever.  I have very low-brow taste, but I love the rose pink and chartreuse green combination:

This is Leila by Frank Dicksee (1892).  Secretly I suspect this is how I would like to spend my afternoons.  My doll reflected this.

There isn’t any machine stitching at all on this.  It is sewn with some brilliant viscose threads that I bought years ago with my mother in India.  They look lovely but they run if you so much as breathe on them.  So the construction and some of the stitching on the front is done with the gorgeous perle threads from Winifred Cottage that I have mentioned before.  I really enjoyed tailoring a bit of a fit and using flared panels to give it some shape.  As ever, the whole thing came to life when I put beads on it. 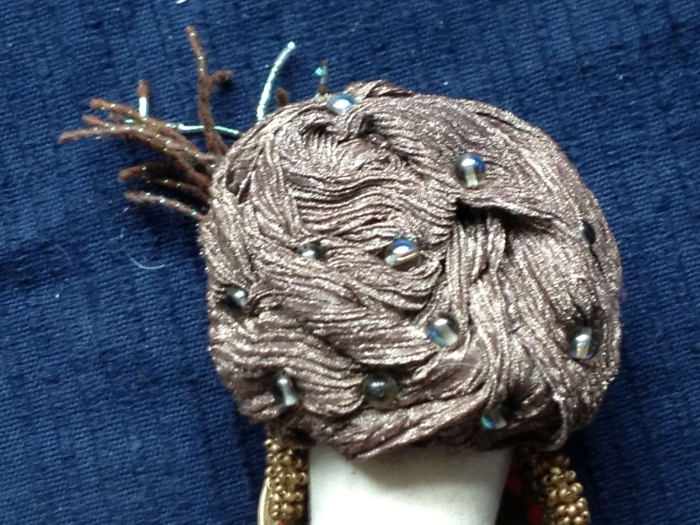 It was also a lot of fun making the turban out of an old metallic scarf that I found in a junk shop.  I fixed it in place with the big blue glass beads you can see here.  I found the tassel thing on the front on the floor of my workroom.  (The great tidy-up has temporarily stalled).   It was a swatch of the yarn I used for another doll’s hair.  The turban was really lacking something according to my Orientalist eye and I tried a lot of beads and odds and ends, but it was the little sample tassel that looked most like a peacock feather-type thing:

The problem is that with the turban and the moustache and beard, she really does look like a man and the Medieval Historian moving it aside called it ‘him’.  So more to muse on.