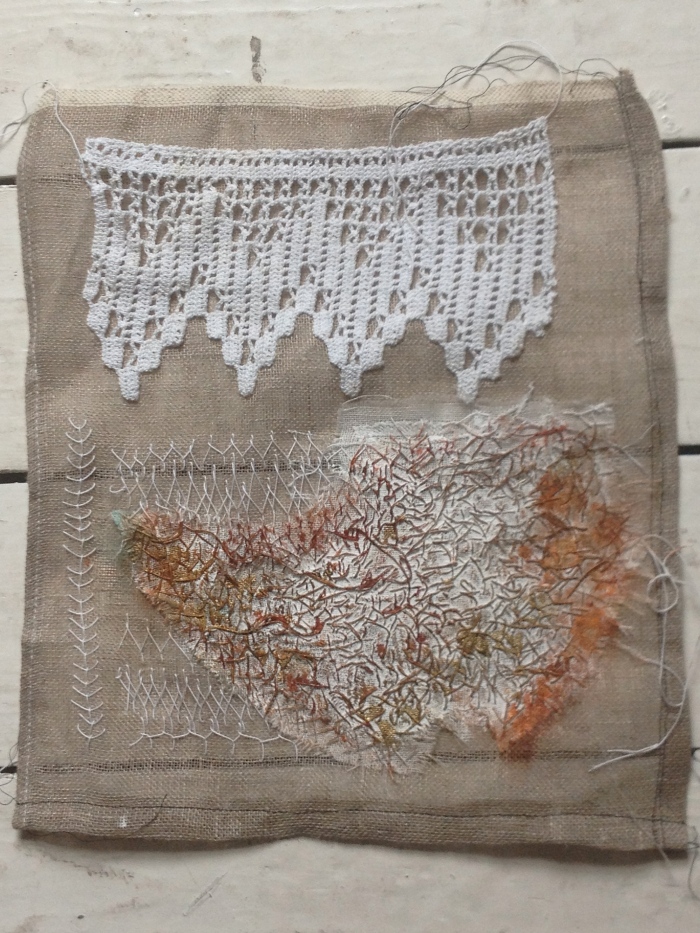 This is the first in a series of small pieces which I intend to bind into an artists book.  The book will be a bit experimental and will deal with Walter Benjamin’s very short piece of writing, ‘The Destructive Character’, first published in 1931.  I will write about the essay itself separately, as it might be a bit of an acquired taste, but it’s not necessary to know about the writing to have a look at the textile piece.  As the title of the essay suggests, however, it is about the Destructive Character.  Essentially, Benjamin is arguing that life has got too full of stuff and we need someone to come in and throw the windows open and let in the fresh air.  I interpret it as saying we need to get rid of all the Victoriana and become modern.  You can see the start of all those clean, straight lines and machines for living that high Modernism produced having their origins in ideas such as Benjamin’s.

I thought it might be interesting to approach the notion of the destructive character in a number of textile ways.  I remembered, some time ago, reading about deconstructed or destroyed stitching as being the very last word in modern textile work.  Unfortunately, I can’t find the reference.  Essentially deconstructed embroidery involves producing some heavy stitching and then cutting into it to deconstruct.  In the example I read about, it was then covered in white emulsion paint so that it became less about stitching and more about pure texture – the stitches dissolved into the latex.  So, I started with some very fine crochet cotton, from the crochet lace sample also in the finished piece, and a piece of open weave furnishing fabric on a very, very loose linen scrim.  I stitched layer after layer of mainly cretan stitch but also a bit of fly stitch and some herringbone:

After this I slashed into it with a very ordinary pair of scissors:

(incidentally, I am amazed at the quality of the close up on the phone on my camera, which I use so that this site doesn’t take forever to load).  I really like the effect of this and the almost grass-like effect of the little tufts of thread: 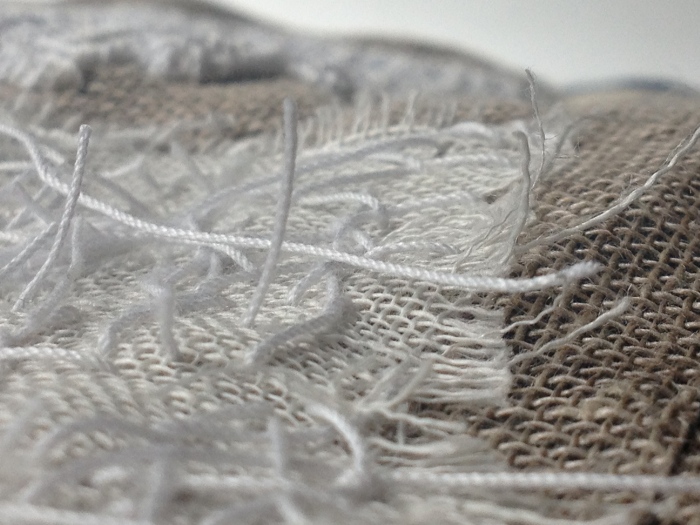 Once I had cut into it, I put on a layer of gesso rather than emulsion paint, as the latter always has a shiny and rubbery look to me.  I’ve done this before with another piece which was about obliterating colour and emphasising stitching in this quilt which is part of the Laura Ashley project:

After I’d gessoed it, I rubbed in some bronze Golden Fluid Acrylic and then some translucent red oxide.  The transformation was really interesting.  The bronze looked dark and only just caught the light a little bit, but the red oxide gave it an earthy pigment-y feel which made me think about very old forms of art such as rock art: 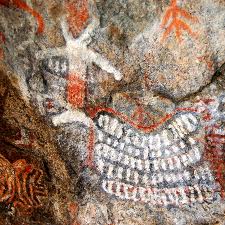 I thought the piece was finished but looking at it today I’m not so sure.  I don’t want it to be over-elaborate, but it isn’t telling me yet that it’s finished.

Although I am going for Benjaminian juxtaposition and letting the viewer make their own interpretations approach, I think the separate elements probably need more integration – or maybe not if they are going to book pages like specimen books.  This may be one to sleep on.