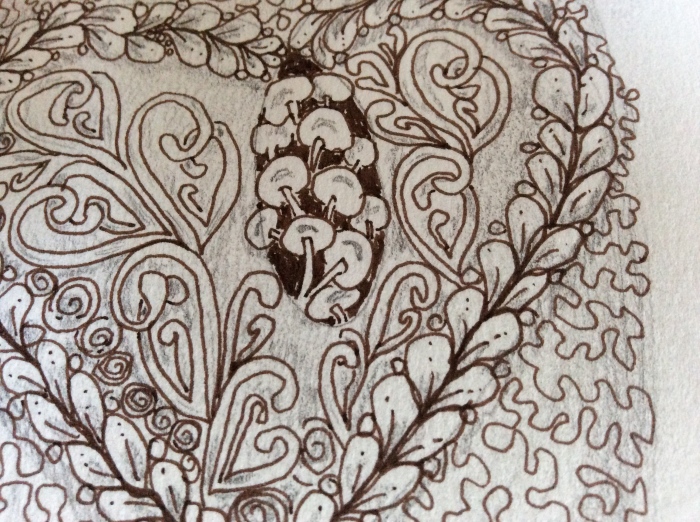 I said that I would do a post on Zentangles, which I have been working on, inspired by my friend Beatriz and her one-a-day art process.

A Zentangle is a drawing, done in ink with some graphite added to make the shading.  I really like the combination of the media.  It begins with pretty random marks across a square which are called strings.  Then you fill in the compartments with a variety of patterns which are pretty simple to do but look impressive when done en masse.  That’s about it.

I came across them at a craft show, I think, and went home and had a look on You Tube.  There are a lot of tutorials and examples up so you can learn how to do them pretty much from the web.  I bought a book, however, in a proper bookshop and not from Amazon.  I chose One Zentangle a Day: A six-week course in drawing for relaxation, inspiration and fun by Beckah Krahula.  It has, as it says, a lesson a day for six weeks.  I think it’s a great start.  It doesn’t insist that you use anything in particular, though it does suggest certain materials, and you can do it with a felt-tip, a pencil and a sketchpad if you want to.

The Zentangle crowd strike me as a bit odd, there is a lot of intellectual property protection wrangling, which I understand but don’t particularly want to know about.  Also I am not especially interested in ‘yoga for the mind’.  I just want to expand my range of patterns and ideas for my sketchbook/workbooks, and to get inspiration for machine quilting and embroidery.  I don’t need the Zen bits so much as the tangles, which are the patterns.  The people that invented it naturally enough want to make a business out of it, and you can buy kits and special paper, as you are supposed to do it on special tiles which are squares of a particular sort of paper with rounded corners.  I think you could probably do it with a biro and some photocopying paper, although the biro would eventually get messy.  I don’t like the you have to join the club atmosphere that much, so recommend the book by Krahula who goes reasonably light on this, and the material on You Tube.

Krahula’s book is good in that it takes you through building up a pattern step by step and even a complete beginner like me can get the basics in a week.  This is my sketchbook which shows the exercises and a finished piece:

You will see that they all have daft names, which I think you are supposed to memorise.  I find it takes about 45 minutes to do a full Zentangle, and they are a brilliant way to fill in dead time like sitting on a train or walking the dog who stops to sniff every single blade of grass in a field.

This is one of my first Zentangles.  And this is a picture I have used before of using the tangles to fill in an existing drawing:

It shows the white on black approach which is effective in drawing black armour.

I’d recommend this, because if you can hold a pen you can do, it is quite relaxing, and it is good fun to stand back at the end of it and see what you have created which is always quite different to what you see close-up.  I like combining my drawings with the tangles as embellishment and fillers:

So, it is worth picking up a pen and having a go.