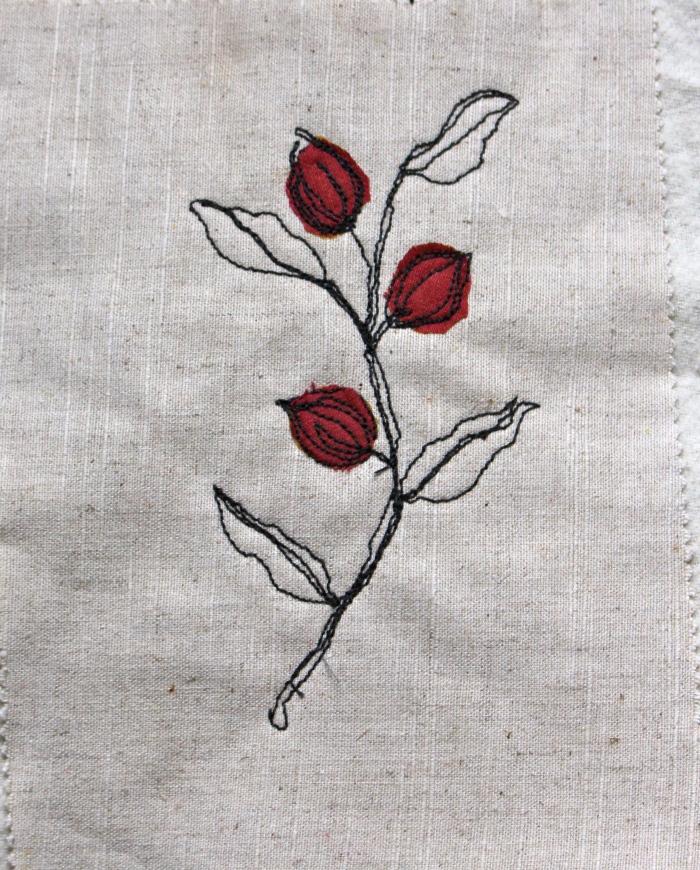 I am not entirely sure what this post is going to be about.  I spent quite a lot of the weekend sewing, which was a massive luxury.  I am preparing a new talk which will be given its first airing next week, and I am desperately trying to finish some samples.  The picture at the top of the post is an example of the drawing with the machine technique that I have just begun to experiment with.  It is a made-up plant in bud stitched onto linen and what I always call cotton bump – curtain interlining which has a great texture for pieces like wall quilts which don’t have to be washed.  If you do wash it you get a great antique effect.

I thought it would be worth talking about something called ‘flow’ in the creativity literature, because I really experienced it when making these small panels.  I enjoyed making them very much, but it was more than just liking doing the work, it was more like what William Morris called ‘joy in work’, an extra dimension to having fun with a hobby.

Flow is a term coined by Mihályi Csíkszentmihályi, a Hungarian theorist of creativity and happiness, because in his field work his interviewees told him that they were experiencing something that felt like being carried along by a river.  Csíkszentmihályi was interested in what happens when you become so immersed in something that you lose all track of time, and although you have worked hard you have more energy than when you started.  Sewing can definitely be an example of this, when your mind seems to go into a different mode of thought.  For this to happen, Csíkszentmihályi posits three conditions:

The flow state is characterised by a number of requirements:

And it makes you feel better.  I tried to write down what I felt during the sewing session, which is difficult after the event.  I described it as stimulating, bewitching, addictive, cleansing and energising and flow.

The reason is, I think, that I rather fell in love with what I was making and, all false modesty aside, it was really easy.  I got my background, used some 501 spray to hold it to the cotton bump and then cut out my applique and stitched with a very heavy dark grey thread: 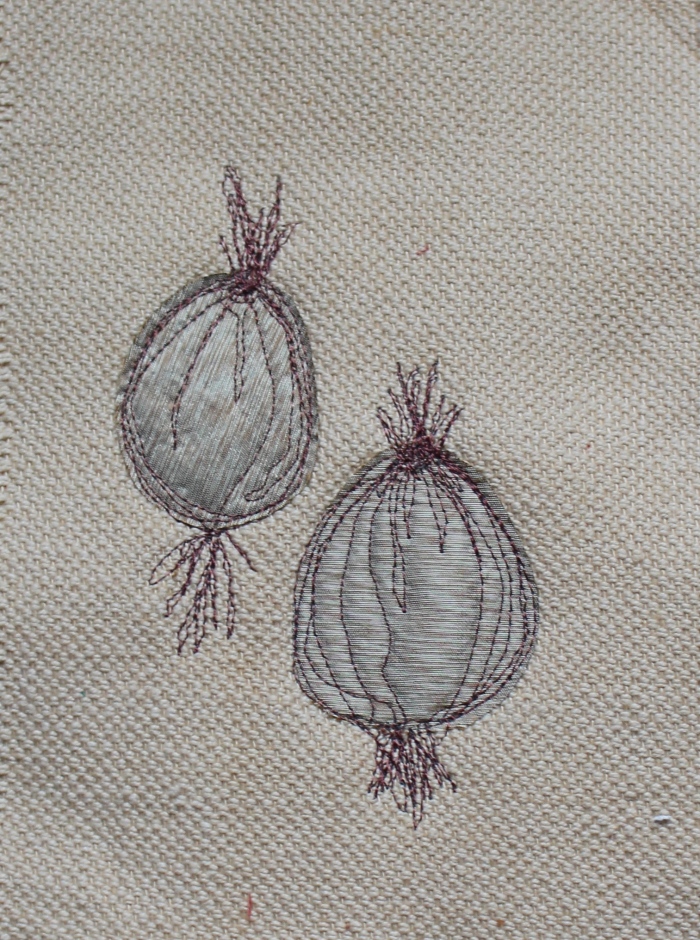 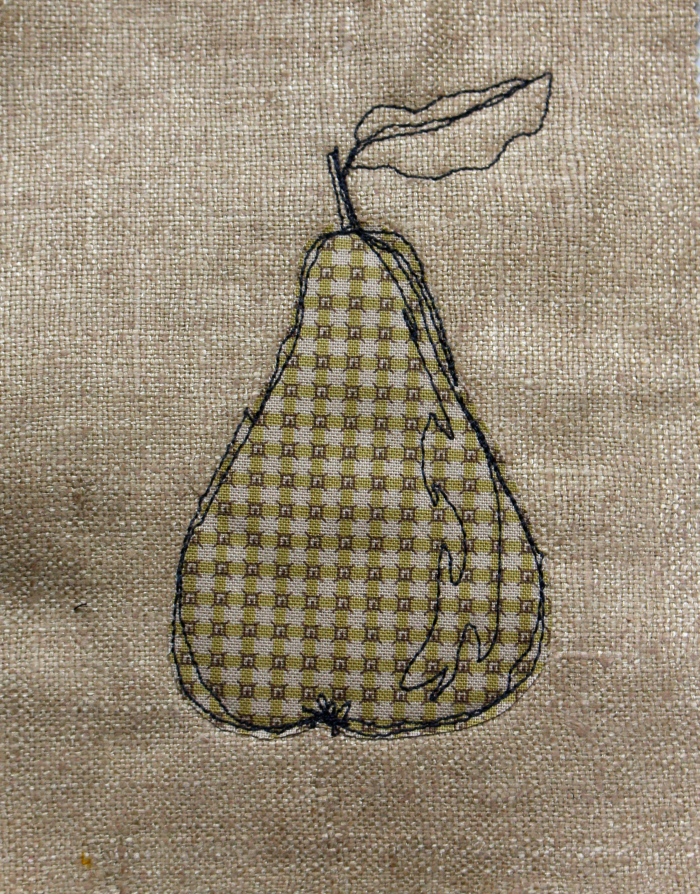 Really easy, and yet the result was very pleasing.  I began to reflect on whether this was because I was making something very derivative which struck me as being in good taste which I recognised as arty rather than being something authentically mine.  I wondered if this was a different manifestation of the just show up and provide the hands and the universe will do the rest phenomenon.  I am not sure.  I don’t know if this is derivative or does mark a new departure in my style.  It is heavily influenced by Janet Clare, but I see myself in it.  Certainly in scenes like this:

which has quite a bleak and melancholy feel to it.

But I want to return to the joy and delight in bunging down some fabric, stitching into it and amazing yourself with what emerges.  I was happy to see these pieces turn up: 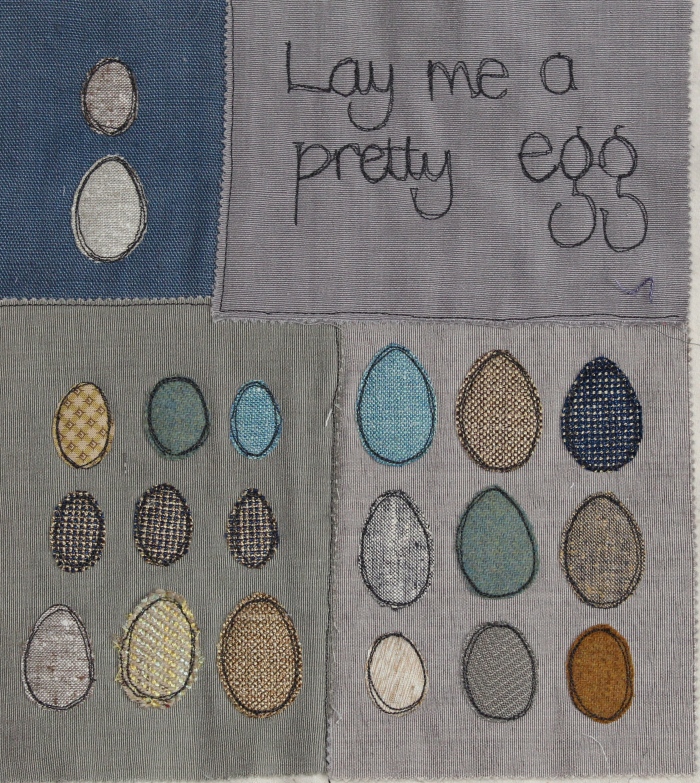 These eggs were made with really gorgeous tiny fabric samples of silk, cotton and wool furnishing textiles.  I couldn’t throw them away despite their size, and was so glad when I found a use for them.  Lay me a pretty egg is a reference to a commenter on a recent post telling me that it was her dialect for someone making a mistake – a nicer version of ‘he really laid an egg there’.  I wanted to use the phrase. 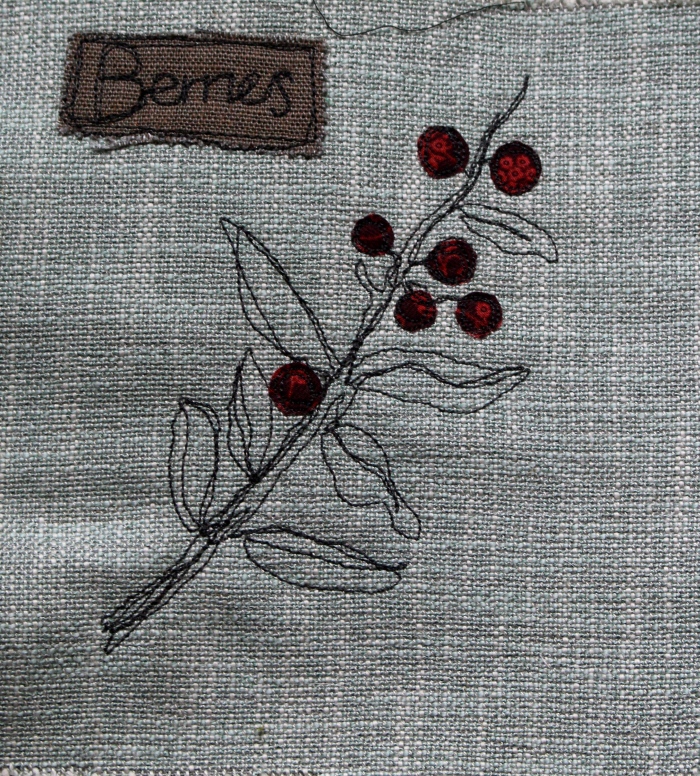 These are made up berries, but the quality of the line for the stem and branches really delighted me.  This sounds immodest, but I had the feeling that I could have closed my eyes and this would have come out right.  It is also completely different to my usual drawing style which is a single continuous line filled in with a watercolour wash: 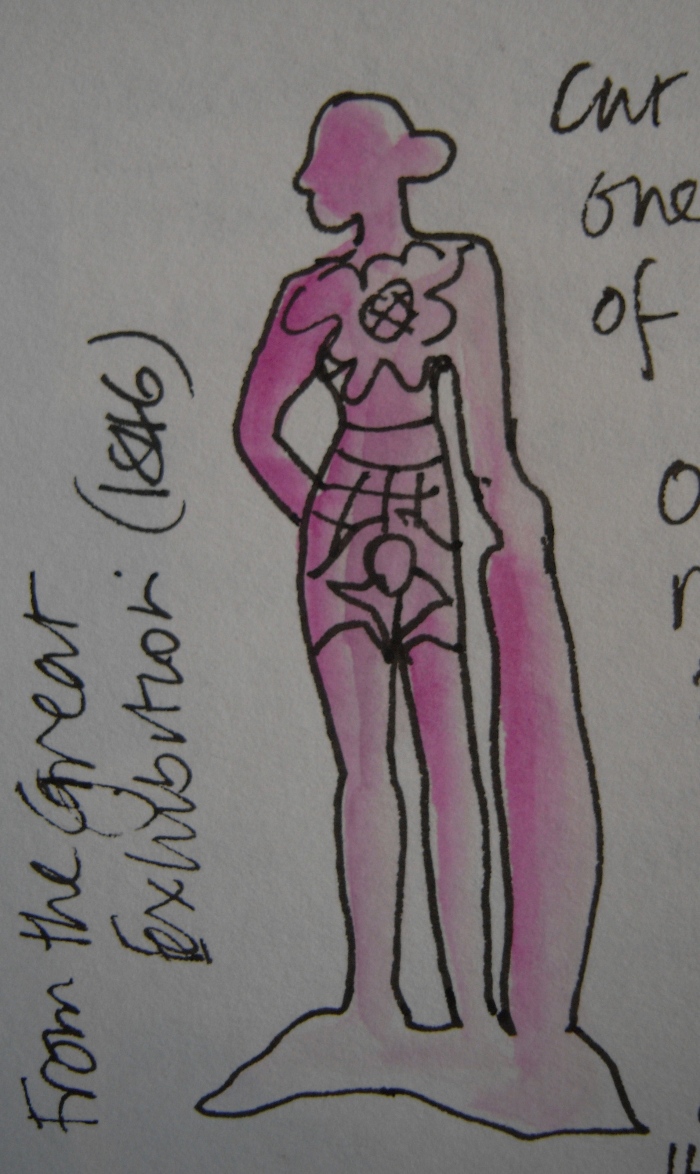 This is  sketchbook page showing my usual simplified but quite definite drawing style.  The sketchiness is great in the embroideries.  It allows for all sorts of instant corrections if the drawing goes badly:

This is another interesting example of this project allowing me to explore some theory that I have worked with for years in a new way.  It is a good example of action research – but that would have to be the subject of another post.

7 thoughts on “The joy of making”