I have just come back from a long weekend break in Spain.  While we were there we had a less than successful stay in Murcia, where the Medieval Historian had been many years previously.  Sadly, everything shuts in Murcia on a Monday which was the only full day we had there, so I did not get to do my very favourite thing of sketching in an archeological or folk museum.  But, looking on the bright side, the shops were open and were having major sales.  I will blog about them separately, but this is a quick post about a tiny hand-held sewing machine that I bought in Tiger.  I think it is originally a Norwegian firm, but Tiger now has lots of branches in the UK, and is worth going into regularly as it turns over its stock very rapidly.  I bought these sequins, for example, in the Bristol, and they are now permanently out of stock:

The other reason for going in is that they play great music and I had a nice time singing Tamla Motown classics with the assistant in the Brighton branch on another trip.

Having said all this, it is a cheap and cheerful shop with an interesting selection of things for makers such as rubber stamps, beads, sketchpads, washi tape and so on, but once it’s gone it’s gone.

In Murcia I picked up a pair of snipping scissors with a case which looks like a long thin mouse (I am always looking for scissors to take on planes), and the mini sewing machine.  It is a good job that I did.  I assumed that the product range would be the same in Murcia and Bristol, but I was wrong.  I can find no sign of this product on the British Tiger website, even though I bought it less than 48 hours ago.

So, I bought it because it was so tiny.  I knew that I was never going to make a full set of curtains with it, but I thought it might have potential.  It does sew quilting weight cotton reasonably well, but the stitch is a chain stitch, like the one that I used to have on my toy sewing machine as a little girl, and which I wish I had held onto.  The best bit of this is that the chain stitch is so tiny and delicate: 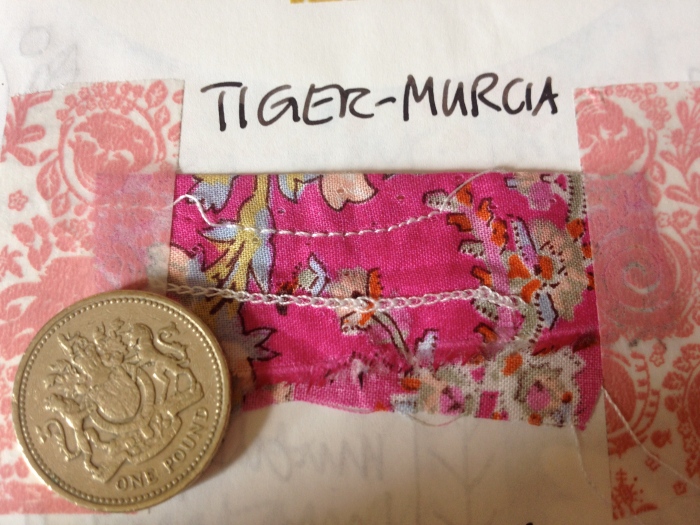 I wonder if it has potential for use in embroidery.  The stitch is far tinier and regular than I could ever achieve.  I will experiment and report back. 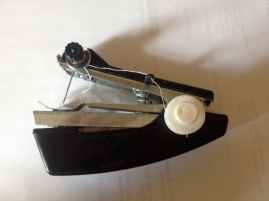 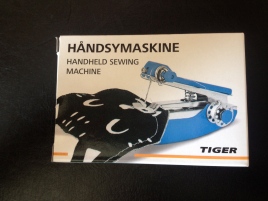